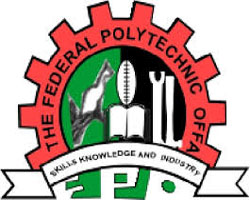 LATEST UPDATE: The application deadline has been extended to 17th December, 2022. See details on how to apply below.

The OFFAPOLY Post UTME cut-off mark is 140. The application cost is ₦2000.

This is to inform candidates who choose Federal Polytechnic, Offa in the 2021 JAMB UTME that the online screening has commenced.

The following categories of candidates are eligible to participate in the screening exercise.

All Candidates who scored 140 and above in the 2022 JAMB UTME and who made Federal Polytechnic, Offa as their First Choice Institution are expected to participate in the screening exercise

1. All Candidates who chose The Fcderal Polytechnic Offa as their first(1) choice institution in the 2022/2023 UTME.

2. Must have OBTAINED the minimum cutoff mark of 140.

3. Have the required relevant O’ level ceredit result(s) as contained in the JAMB brochure

4. And must have uploaded their O’ level result(s) on JAMB CAPS through a Certified CBT Centre.

1. All eligible Candidates should log on to the Polytechnic portal www.fpo.edu.ng to do the Following

i. To make the online payment;

ii. Fill-in their details and the security form;

iii. Upload their results and other necessary credentials;

iv. Print out their security form and post screening slip:

v. Submit the print out security Form PERSONALLY at the security office in the Main campus of the Polytechnic along Ojoku road Offa. Kwara State.

vi. All Candidates are to make an online payment of #2,000.00(Two Thousand Naira) only with an ATM card that is Interswitch compatible

2. Candidates must write their names in full, surname first as written on their JAMB RESULT SLIP and O’ level results/ certificates.

3. AND Candidates must have a personal active email address

NOTE THAT FAILURE TO COMPLY WITH ALL THE ABOVE STATED PROCEDURES AND/OR ANY FALSE CLAIM BY CANDIDATES SHALL LEAD TO DISQUALIFICATION OF SUCH CANDIDATES AND FORFEITURE OF THE ADMISSION AT ANY TIME IT IS DISCOVERED.

ALL uploud MUST be done within eight (8) weeks from the date of this advertisement.

The Federal Polytechnic, Offa is a Nigerian tertiary institution located in Offa, Kwara State. Established in 1992 during the administration of Ibrahim Babangida, the polytechnic offers National Diploma and Higher National Diploma courses at undergraduate levels.

The Federal Polytechnic, Offa came into existence in 1992. A presidential pronouncement of its establishment was made at the Palace of His Royal Highness, Olofa of Offa, late Oba Mustapha Olawoore Olanipekun Ariwajoye II, by the then Military President, Ibrahim Babangida during a state visit in 1991.

Consequently, a Local Task Force was then constituted by His Royal Highness, the Olofa, under the Chairman Alhaji Tiamiyu Olatinwo with six other eminent indigenes of Offa and Chief Ayotunde Raji as Secretary.

The pioneer Rector of the Polytechnic, Engr. (Mrs.) Taiwo Adeife Osemeikhian, administered the Polytechnic from February 1992 to year 2000, under the supervision of a Federal Task Force led by the Director of Science and Technology, Federal Ministry of Education. The Task Force was responsible for taking major policy decisions affecting the Polytechnic and performing the functions of the Governing Council. She handed over to Dr. Razaq Bello who was Rector between 2000 and 2006. Dr. Mufutau Olatinwo, took over the affairs of the Polytechnic in 2006 as Ag. Rector and later as the third substantive Rector since 2008.

The first Governing Council of the Polytechnic was put in place in year 2000, the second in 2005 the third in 2009 while the fourth and current council under the chairmanship of Chief Okey Ezenwa was inaugurated in April 2013.