The National Youth Service Corps (NYSC) has signed a Memorandum of Understanding with the International Institute for Tropical Agriculture (IITA) in a bid to boost the productivity of the Scheme’s agricultural programme.

Speaking at the brief ceremony, which took place at the IITA Headquarters, Ibadan, the NYSC Director-General, Brigadier General Shuaibu Ibrahim, thanked the Agency for giving Corps members the opportunity to discover and develop their potentials in agricultural practices. 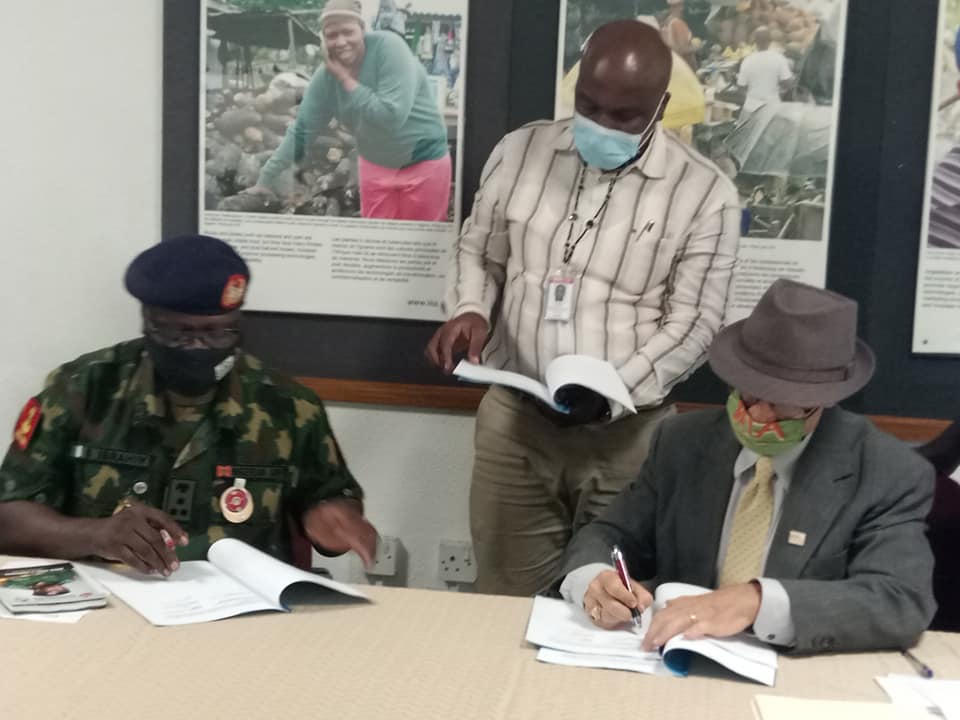 He stressed that the Corps members were full of energy and patriotic zeal, adding that the nation would benefit immensely from their potentials if other Corps Employers provided them with the enabling environment.

Ibrahim said NYSC always encouraged the youths to seek self-employment and had introduced the Skill Acquisition and Entrepreneurship Development programme in 2012 as a platform to empower them to be wealth creators and employers of labour.

He added that the Scheme would continue to leverage on the existing relationship with various stakeholders for the benefit of Corps Members and overall national development.

The Director-General also advised Corps members serving at IITA to take a cue from their predecessors and embrace all empowerment opportunities provided by the Agency.

“I enjoin you to take advantage of the opportunities which will empower you and help to actualize the Federal Government’s vision on food security,” he said.

Also speaking, IITA’s Deputy Director-General for Partnership and Delivery, Mr Kenton Dashiell, stated that the fifty-three-year-old institute had been working to prevent poverty and hunger as well as enhance food security and economic diversification.

He said the Agency placed a high premium on Corps members serving there over the years with the latter gaining experience while former benefited from their potentials and ingenuity.

Dashiell explained that the IITA Youth Agropreneur programme commenced with a group of youths, posted for NYSC Primary Assignment in the Institute and were encouraged to receive training in various profitable ventures in the agricultural value chain.

The Deputy DG, who disclosed that about 665 Corps members had served in IITA within the past eight years, said the Institute was desirous of strengthening its relationship with NYSC so as to help Corps Members and other youths to join in boosting agriculture and reduce the importation of food products into the country.

During the visit, the Director-General and his entourage were taking in a tour of facilities at the Institute.