He promised to respond to interview questions sent to him via e-mail the following day, and ended his correspondence with a famous quote: “To be is to do, Socrates; To do is to be, Shakespeare; Do be do be do, Sinatra.”And you wonder, who signs off a mail with a quote like that if not a man of deep thought. 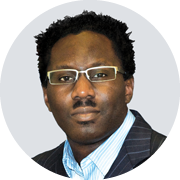 So it is not a coincidence that Deji Akinwande, a Nigerian professor at the University of Texas is the one being nominated alongside 105 other distinguished researchers who, in a few months, will receive the highest honour bestowed on scientists and engineers by the American government. The award is offered to scholars whose researches are considered innovative and beneficial to society.

President Barrack Obama described Akinwande, and other winners of the Presidential Early Career Awards for Scientists and Engineers (PECASE) as scientists “leading the way in our efforts to confront and understand challenges from climate change to our health and wellness.”

An Associate Professor at the Cockrell School of Engineering, the University of Texas at Austin, Akinwande is known for his groundbreaking research on nanomaterials, sensors, devices and flexible technology.
According to his university’s website, he is one of the top researchers in the world in the areas of graphene, silicon electronics and 2-D nanomaterials for use in flexible electronics.

“In 2015, Akinwande created the first transistor out of silicene, the world’s thinnest silicon material, and he is continuing to advance the capabilities of computer chips and other electronics,” says the university.
The news of his selection came as a little surprise to his father, Mr. Duro  Akinwande who was a former Financial Controller at Guardian Newspapers Limited (GNL).“Deji has always been a very precocious child. His brain is superb, and he is a prudent spender,” he told The Guardian during a phone interview.

Speaking about his childhood, Mr Akinwande said his son’s love for book and learning is legendary. “He has very little interest in social events; in fact, I can count the number of social events he had ever attended since he was born.”
Little wonder Mr. Akinwande was extremely shocked to see his son speak so boldly and eloquently in front of many professors while defending his Ph.D. thesis at Stanford University eight years ago.

“He invited me to attend his defence, and I was nervous because I had never seen him speak in public before. But I was pleasantly surprised to see my son speaking and answering questions from several professors with many years of experience. After the defence, the Dean of Engineering School invited me into his office and told me that I was very lucky to have a son like Deji. He said Deji is extremely brilliant. So, the young man has always been a source of joy to us. He is never a troublesome child.”

Yet Mr. Akinwande would recollect a couple of times when his son drew his hot anger. After retiring from the Guardian newspapers in 2003, he relocated to the US to live with his children; four of them were already resident in the USA then. On arrival, he found Deji, his second son wearing curly hair.

“I was really disappointed and told him such hair style was not befitting for a well-behaved child. But Deji was also shocked that his hair style could cause me such distress. It was his Uncle, Tayo Akinwande who is also an alumnus of Stanford University and a Professor at MIT (Massachusetts Institute of Technology) that advised me to let him be. He said, as he (Deji) climbs higher in his career, he would adopt a more mature appearance.

The second time was when he got married without telling me. His mother died in 1995. So I am his closest relation and his three brothers. But he told nobody, not even his Uncle whom he respects so much.”

Well, the anger lasted only briefly. The entire family has learnt to accept Professor Akinwande and his ways.

Below is the interview with professor Akinwande:

Do you mind explaining your research on nanomaterials, sensors, devices and flexible technology?

Our research work is focused on two aspects of electronic technology; one aspect is making more energy efficient electronics so that everyday devices such as laptops, smart phones and mobile gadgets can last say a week on a charge rather than a day. The second aspect of our research is in making electronic products on plastic sheets. This will enable foldable, bendable and stretchable computers, phones and display devices that are much cheaper, environmentally-friendly and robust against all sort of common but expensive hazards such as drops. All of these benefits are due to the outstanding properties of plastics. For example, nanotechnology on plastics could lead to smartphones for N10,000 compared to N100,000 for current products. Another example is you can have a small plastic smartphone that you could unfold into a bigger tablet to watch videos.

In what ways will your latest discoveries transform lives in Africa?

These nanotechnologies we are researching can benefit everyone in every country. These are transcendental concepts that apply globally. It is of major interest in America and indeed that is why we have had substantial government and industry support to bring these ideas to life as prototypes.

In Nigeria and Africa, our latest discoveries have additional significance because of the cost and reliability advantages of plastic electronic products, which will make it more accessible to a broader range of the society. Furthermore, in the long term, it can reduce the cost of production that can lead to local manufacturing and jobs and also reduce waste processing and associated health risks owing to the more environmentally-recyclable nature of plastics.

I have always been driven by ideas since I was a little boy growing up in Lagos. My father worked at major newspapers so I read a lot, and my mother worked at the ministry of education, hence, learning and schooling has always been important to us. I was very fortunate to attend FGC Ido-ani for my secondary education where I learned how to work hard, and to adapt to any situation all the while maintaining a jovial attitude in the spirit of the old saying, ‘there is always a reason to smile’. This proved invaluable when I moved to America for my undergraduate studies. Everything seemed relatively easier in the US and all my hard studies eventually paid off when with some good luck I got accepted for Ph.D. studies at Stanford University, one of the very best programs in the World. At Stanford, I learned to be an educator and a thinker that can turn abstract ideas into discoveries while working together with smart people from all walks of life. With God’s grace I managed to distinguish myself during my Ph.D. studies that led to a professorial job at the University of Texas-Austin, one of the top programs in the country, where I have been fortunate to work with outstanding students and researchers on nanotechnology. In brief, the hard-working habits I learned in FGC Ido-ani and the scientific skills I gained at Stanford University combined with some good fortune have allowed us to be quite successful in the very competitive American environment. My mother and father have been a limitless source of inspiration.

Can you also speak about your teaching experience at University of Texas at Austin and the kind of support you receive as a scholar in a white-dominated environment?

My experience at the University of Texas – Austin has been wonderful. it is an international institution with people from all over the World. Indeed, there is a famous African conference held every year here, chaired by Prof Toyin Falola, one of my esteemed colleagues at the University. What I have found is that a friendly attitude and strong intellectual merit will take you as far as you aspire at virtually all Universities in America.

Will you ever consider working in Africa or Nigeria?

I have a permanent interest for collaborative projects in Africa and Nigeria specifically. Since 2008, I have been exploring opportunities to contribute to technology and development.

Recently, specific opportunities have been identified with two institutions, one in Lagos and another in Ondo State. I am now planning an extended visit to help the projects along, which are focused on commodity technology for health and another on industrial nanomaterials. Similarly, I have a deep longing to collaborate with fellow educators in Nigeria on post-secondary learning, which is very important for future advancement because the seeds of today are the fruits of tomorrow. I welcome correspondence from interested parties in Nigeria.