Home » School News » What You Need to Know About Nigerian Universities and Their Catchment ...

Nigerian Universities and Their Catchment Areas: Increasing Your Admission Chances

According to Dr. Fabian Benjamin, Head of Information at the Joint Admission and Matriculation Board (JAMB), admission is defined in areas of merit, catchment area and educationally less developed states (ELDS). Merit gets 45%, 35% is for catchment area. Each university is localized within a number of states. Those states get 35% of the admitted candidates. And 20% goes to those from educationally less developed states.

What are University Catchment Areas?

Assuming you are from Edo State and you want to apply for admission into University of Benin, then you will have advantage over those who are not from the school’s catchment area.

To clarify further, let us use the University of Lagos, UNILAG as an example. There are 6 states in Nigeria that belong to the school’s catchment area: Oyo, Lagos, Osun, Ogun, Ondo and Ekiti.

This states are given special consideration when it comes to admitting students UTME into University of Lagos, in the sense that the cut-off marks assigned to this state are always lower than the merit cut off assigned to every other states.

To understand this much better, check out the photo below. 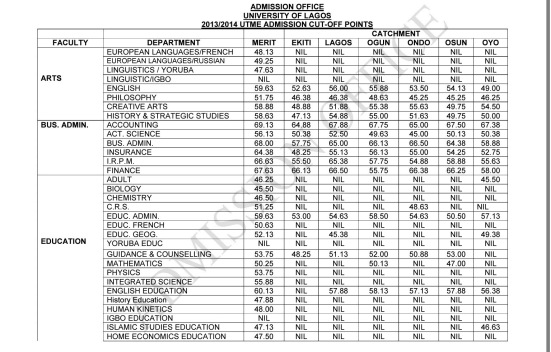 Looking at the screenshot above, you will notice that the catchment cut-off under each state is lower than the merit cut off.

Note that this does not mean that because you are from any of the catchment areas, you are automatically admitted! Gaining admission into any Universities in Nigeria is a tug of war!

Some Nigerian Universities and Their Catchment Areas

This system is a way of recognizing natives of a locality where a school resides. This is one of the reasons why all Nigerian states have at least a University so as to main equality in access to education. Nevertheless, excellence is not sacrifice on the basis of where you come from, catchment sometimes helps and serves as tie-breaker.

Students who have analyzed their strengths knowing well they cannot compete strongly with others are advised to seek admission in Schools where their states of origin is a catchment.

All States of the Federation.

There are also some states which are accepted as educationally less developed states (ELDS) in any federal university and for these states, the merit cut-off mark for admission is reduced. These states include: Adamawa, Bauchi, Bayelsa, Benue, Borno, Cross-River, Ebonyi, Gombe, Jigawa, Kaduna, Kano, Katsina, Kebbi, Kogi, Kwara, Nasarawa, Niger, Plateau, Rivers, Sokoto, Taraba, Yobe, Zamfara. According to the Federal Government (NUC) Admission Policy, 20% of those offered admission are supposed to be from ELDS.