See What Happened At Education Ministry Office In Abuja

Nigerian students occupied and marched to the office of the Ministry of Education in Abuja demanding the removal of the minister over 13 vice chancellors he sacked. Even after much persuasion, they refused to retire back to their homes causing a rowdy scene while chanting their songs

Hundreds of Nigerian students under the aegis of National Association of Nigerian Students (NANS), on Thursday, May 11, invaded the premises of the Federal Ministry of Education in Abuja, demanding the sack of Mallam Adamu Adamu, the minister of education. 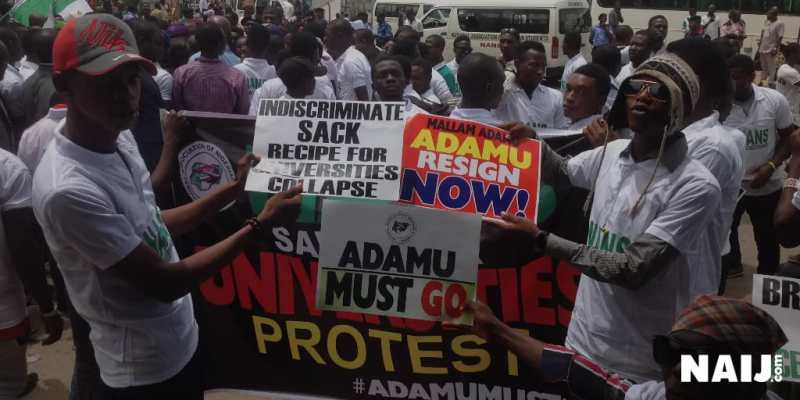 This was over the minister’s refusal to reinstate the 13 vice chancellors of Nigeria’s federal universities who were wrongfully sacked by the federal government in February.

The demand for the reinstatement of the sacked VCs by the students followed the public apology tendered by President Muhammadu Buhari in March for the wrongful dissolution of the governing boards of the affected universities, which preceded the sack of the 13 Vice Chancellors.

The students who arrived the education ministry, which is located at the Federal Secretariat, Eagle Square, at about 11.45 am in ten buses headed straight to the minister’s office but were promptly prevented by some very alert policemen and civil defence personnel who quickly locked the main gate to the ministry’s office.

Not deterred, the students caused rowdy scenes as they chanted songs demanding the immediate sack of the minister.