Nigerian Student Receives Honour From the Ministry of Education For Emerging With 5.0 CGPA in Russian Medical University

It was reported that Olalusi, who was the best graduating student in the whole Russian Federation in 2013, studied in RNRMU under the Russia-Nigeria Bilateral Education Agreement.

Speaking at the event, Dr MacJohn Nwaobiala, the Permanent Secretary in the ministry said a lot of Nigerian students were brilliant but Olalusi was a genius.

He said Olalusi had become an ambassador not only to the ministry but to Nigeria and Russia.

“We have to search the Guinness Book of Records for anybody who has achieved 5.0 in a university.

He urged Olalusi to continue to be a role model to young Nigerians and also called on him to explore opportunities in post graduate research.

In her speech, Mrs Ifeoma Agunwa, the Director, Federal Scholarship Board, said Olalusi made 5.0 GPA in all the courses he took in the seven years he studied Medicine in Russia.

In her citation on Olalusi, Agunwa said he ranked as one of the best students in the faculty which handed him a place in RNRMU’s Hall of fame for academic excellence. 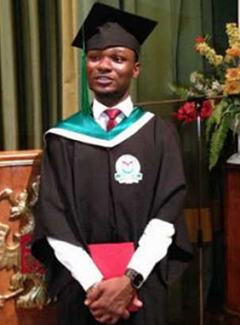 According to her, he is presently going through the compulsory National Youth Service scheme in Rivers.

Mr Artem Romanov, who represented the Russian Embassy, said that Olalusi’s feat was very significant for everybody in Russia.

Romanov said “Nigeria is blessed with abundant human potential which is officially acknowledged in Russia.

“It has been acknowledged in the Russian Ministry of Education that Nigerians have a lot of exceptional talents. Genetically, Nigerians grasp knowledge easily.

“Olalusi is a hardworking person. It is not easy to achieve such in Russia; it goes with talent and hard work.

While showing his appreciation, Olalusi thanked God for his rare feat and also commended the Federal Government and the Scholarship Board for the opportunity given to young Nigerians to distinguish themselves. (NAN)