For the second time in as many years, a student at suburban New York’s Elmont Memorial High School has been accepted at all eight Ivy League universities.

Augusta Uwamanzu-Nna has until May 1 to decide whether she’ll attend one of the prestigious northeastern universities. The daughter of Nigerian immigrants also can choose from Johns Hopkins University, Massachusetts Institute of Technology, New York University and Rensselaer Polytechnic Institute.

‘My recent accomplishments reflect the hardworking ideals of the town of Elmont, my supportive parents and my dedicated teachers. I am elated but most importantly I am thankful,’ said the 17-year-old valedictorian with a 101.64 weighted grade-point average.

Augusta is the daughter of Nigerian immigrants, who are obviously thrilled with her application success.

Augusta Uwamanzu-Nna (Middle) and her parents

‘My family is so excited,’ Augusta told News 12 Long Island. ‘Sometimes I feel like they get so much more excited than me. They literally scream. When I called my mom and told her, she was screaming on the phone.’

‘Though I was born here in America, I visited Nigeria many times,’ she told WABC. ‘And I’ve seen that my cousins don’t have the same opportunities that I have. So definitely, whatever I do, I want to make sure that it has an impact on Nigeria.’

Augusta credits her success to her teachers, perseverance and her parents who taught her the importance of education.

‘I’ve struggled with numerous classes in the past,’ she said. ‘But I guess what allowed me to be successful, ultimately, in those classes, at the end, is my persistence and my tenacity.’ 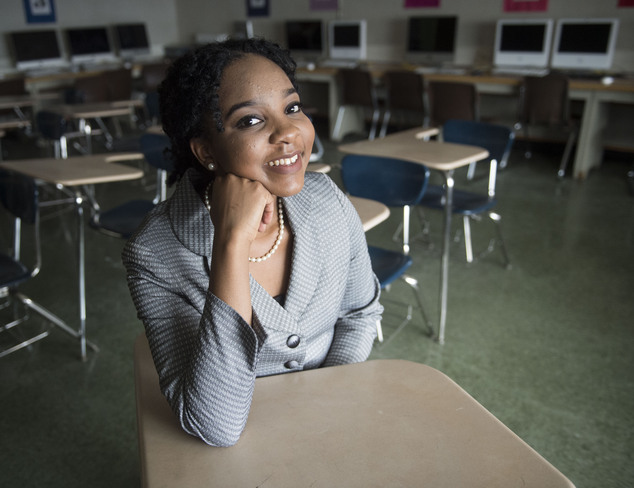 Elmont Memorial High School valedictorian Augusta Uwamanzu-Nna poses for a photo in an empty classroom on Monday, Aug. 4, 2016 in Elmont, N.Y. Uwamanzu-Nna has won acceptance to all 12 schools she applied for including all eight Ivy League universities. Its the second time in as many years a student at the suburban New York high school has been accepted at all eight Ivy League universities. (Alejandra Villa/Newsday via AP)

I’m still quite unsure what school I’m going to attend, but I know attending any of them will be such a great honour. But for now, it’s just so amazing. I really can’t believe it, still.

The subject that most interests Augusta is science, and she was a finalist in an Intel competition for her research project on a cement that could prevent underwater oil rigs from rupturing.

She even received an invitation on Monday to attend the White House Science Fair.

‘She knows that you have to work,’ Augusta’s research adviser Michelle Flannory said. ‘Is she naturally talented? Yes, but she definitely pursues excellence.’

With just under a month until she has to make her final decision, Augusta says she’s still not sure which school she will attend.

‘I’m still quite unsure what school I’m going to attend, but I know attending any of them will be such a great honor,’ Augusta said. ‘But for now, it’s just so amazing. I really can’t believe it, still.’

Last year, Elmont’s Harold Ekeh (also the son of Nigerian immigrants) chose Yale from among the 13 universities where he was accepted.

‘We have been flying under the radar for years but there are some really great things happening here,’ Caron Cox, chairwoman of pupil personnel services at Elmont Memorial High School, told Newsday.