The attention of the Nigerian Defence Academy (NDA) has been drawn to a fake and outrageous NDA Letter of Admission being circulated through emails, social media and other sources. The fake letter purportedly signed by the Academy Registrar is NOT from the NDA. The letter also contains the financial requirements for the following:

The NDA does not in any way charge for School fee, Accommodation and Acceptance fees or any fee at all. It is pertinent to note that all admitted NDA Candidate would be contacted by the NDA authorities through appropriate means. Furthermore, only qualified candidates who successfully pass the Medicals, Physical and NDA Selection Board interview would be considered. The list of all NDA successful Candidates would be published at the official NDA website (www.nda.edu.ng) and in the national dailies at the end of the selection exercise with the approval of the Chief of Defence Staff. Admission letters will be issued to successful candidates after matriculation in December 2017.

The general public is therefore advised not to fall prey or have any dealings with the said fake NDA admission letter. Also, NDA admission letters are only given to successful candidates after resumption and completion of appropriate documentation in the NDA, Kaduna. Accordingly, the general public is advised to report anyone circulating such letters or similar information to the nearest Military or Police Unit. For avoidance of doubt a copy of the fake letter is as shown below. 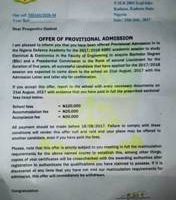