See The Lightest Metal Discovered To Be 99.9 Percent Air

How do you build the world’s lightest metal? Make it mainly from air, according to scientists. The material, known as a “microlattice,” was developed by scientists at HRL Laboratories in Malibu, California, which is co-owned by Boeing and General Motors. The new microlattice is made up of a network of tiny hollow tubes and is roughly 100 times lighter than Styrofoam.

In an effort to save fuel, aerospace and automotive companies constantly strive to make their materials as lightweight as possible without sacrificing structural integrity. The process used to build the new microlattices holds huge promise, the researchers say, because the materials created are not only incredibly light, but also very strong. 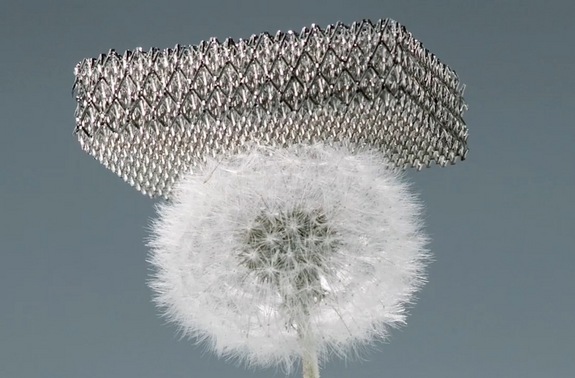 Boeing showcased the material in a recent video, by demonstrating how a small piece of metal microlattice could be balanced on top of a delicate dandelion seed head.

“People think it must be the metal that’s the light part, so they assume we made some new alloy,” said Sophia Yang, a chemist at HRL Laboratories. “This was actually made from nickel-phosphorous, a very well-known metal, but we are able to engineer how the metal is architected in order to create a structure that can still stand by itself, yet be so light it can sit on top of a dandelion and not perturb it.”

The material’s remarkable properties are based on the same principles that allow the Eiffel Tower to support a skyscraper-size structure at a fraction of the weight of a conventional building. HRL’s innovation was to translate these principles to very small scales.

The microlattice’s network of interconnected hollow tubes mimics the structure of bridge supports, the researchers said. But in this case, the walls of the tubes are just 100 nanometers thick — 1,000 times thinner than the width of a human hair — meaning that the material is 99.99 percent air.

The structure is built using an innovative additive manufacturing process, similar to 3D printing. But while 3D printing builds up structures layer by layer, the solution developed by HRL Labs uses special polymers that react to light to form the entire structure in one go.

By shining ultraviolet light through a specially patterned filter onto the liquid form of the polymer, an interconnected three-dimensional lattice can form in seconds. This structure can then be coated with a wide variety of metals, ceramics or composites (depending on the application) before the polymer is dissolved, leaving a microlattice of connected hollow tubes.

Researchers can vary the rigidity of the structure by tweaking the chemical makeup of the polymer, or adjusting the pattern of the filter. This means they can create both highly flexible structures suited for damage absorption and very strong ones designed to provide structural support, Yang told Live Science.

“The way we see this technology growing is as a fundamental manufacturing process. It can be applied to a number of different applications,” she said. “We are working on really scaling up the process. We do R&D, but these materials can’t stay in the lab — we need to work out how to make them on a larger scale.”

Boeing is collaborating with NASA and the Defense Advanced Research Projects Agency (DARPA), the branch of the U.S. Department of Defense responsible for developing cutting-edge military technologies, to build new materials for spacecraft and hypersonic vehicles. The lightweight metal could also be used in projects aimed at developing next-generation parts for the lab’s co-owners.

In one promising avenue of research, microlattices are being used in the so-called sandwich structures that have become the standard for lightweight design in the aerospace industry. By attaching thin sheets of a stiff material to a thick but lightweight core, it is possible to create highly rigid structures that aren’t heavy, the researchers said.

Normally, the cores of these structures are made using foam or lightweight materials arranged in a simple honeycomb pattern, but using a microlattice instead could not only reduce weight but also drastically increase the strength of the structures. This is the focus of HRL Lab’s work with NASA and DARPA.

Despite the promise of the microlattice approach, Yang says it will likely be years before the metal can be widely used commercially, because there are stringent rules surrounding aerospace and automotive materials. But, because the microlattice fabrication process is both quick and cheap, she is confident that the ultralightweight metal could soon be commonplace.