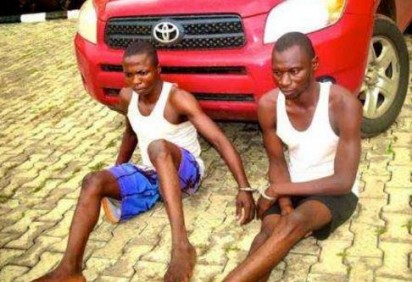 The convicts, Daniel Itah Effiong and Bamitale Olayemi, were the security/gate man of the 79-year-old former Professor of Veterinary Medicine, and driver, respectively.

Delivering judgement, Justice Williams Olamide found them guilty of the three-count charge of conspiracy to murder, murder and robbery. They were accused of strangulating the deceased to death in his residence at Ijapo Estate, Akure, Ondo State, on June 21, 2015, and stole his Toyota RAV 4, 2013 model and N7000.

The offence, according to the prosecutor, who is the State Director of Public Prosecution, Mrs Adejoke Tuki, was contrary to and punishable under Section 324 of the Criminal Code Cap.37 Vol. 1 Laws of Ondo State of Nigeria, 2006.

Justice Olamide, in his judgement which lasted about two hours, held that the prosecution was able to establish and prove the case against the former domestic staff of the late professor beyond reasonable doubt and to the satisfaction of the court.

He declared: “The accused persons were callous, wicked and inconsiderate when they decided to sniff out life of an elderly person and their benefactor over his property. Against this backdrop, the accused persons do not deserve the sympathy or mercy of this court.

“Law must take its cause and this will serve as a deterrent to others. The accused persons are hereby sentenced to death by hanging. May God have mercy on your souls.”

It will be recalled that the two domestic staff, after they murdered their boss, dumped his corpse in a store/generator house before they fled.

Security operatives and family members of the late professor had thought he had been kidnapped until detectives in Ijebu-Ode, Ogun State, arrested the domestic staff while they were about to sell the stolen car for N400,000.

The dealer, who wanted to buy the car became suspicious because the market value was N5 million. He informed police and the suspects were arrested.