The presentation at the 2020 JAMB policy meeting by the Registrar of JAMB, Prof. Ishaq Oloyede has been made available, and it contains statistical data on the cumulative performance of candidates in the 2020 UTME. The data shows that 1,352,988 candidates scored 120 and above while 275,206 scored 200 and above.

View the table below for more details on the cumulative performance of candidates in the 2020 UTME, as provided by the board.

The Joint Admissions and Matriculation Board (JAMB) has published the names of candidates who emerged with the highest scores in the 2020 Unified Tertiary Matriculation Examination ( UTME).

This was disclosed during the JAMB Policy meeting that was held on June 16th, 2020

The candidates scored between 352 and 365 in their UTME. Two candidates from Anambra State were overall best with 365 and 363 scores, respectively.

The third candidate is from Edo State with 359 while two candidates from Ekiti made the list on the fourth and fifth positions, scoring 358 and 356 respectively.

Another two candidates from Delta also scored 359 and 352 respectively.

Other states that appeared on the list are Ekiti, Ondo, Akwa Ibom, Kwara, Oyo, and Ogun states.

The names of the candidates and scores obtained are shown below; 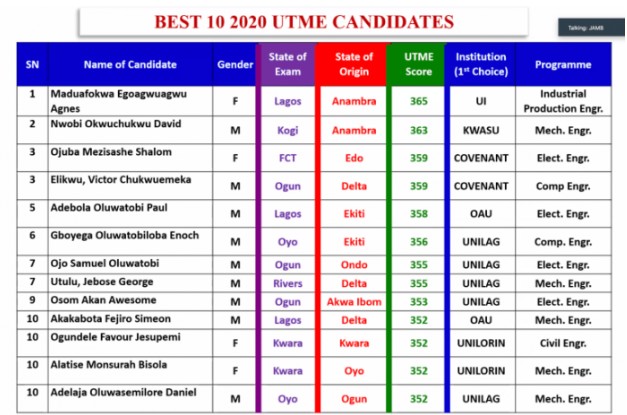 Also See: How to Check Your JAMB Result