The Ibarapa Polytechnic, Eruwa, on Wednesday has shut down both academic and non-academic activities over protest by some ex-students of the institution. 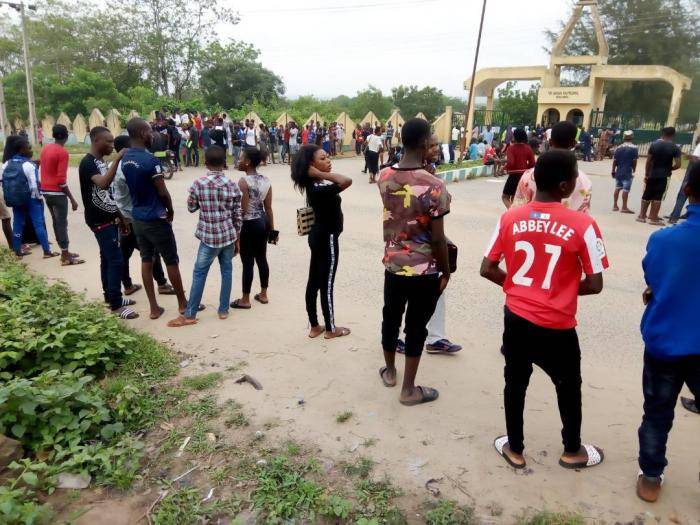 The ex-students protested against the non-issuance of certificates and non-mobilisation of graduates for National Youth Service Corp (NYSC) scheme two years after graduation from the institution.

The school’s main gate was shut down by the protesting students who lamented that they were yet to collect their certificates and be mobilised for the NYSC scheme as a result of non- accreditation of their courses. They complained that management had failed in their responsibilities to resolve the issue, adding that the management of the institution had mismanaged funds meant for the accreditation of the engineering course of the institution.

The protesters while speaking with journalists said that the management resolved to meet them on Wednesday by 8am to address the issue and their failure to come on time was what led to the closure of the main gate.

“We have not heard anything about this issue since our last protest, all our efforts to get in touch to the authority concerned proved abortive, our problems are yet to be attended to and we are here to show our grievances,’’ they said.

Comrade Wasiu Oke, the National Senate President of the Federation of Oyo State Students Union, (FOSSU), confirmed that the association was aware of the plight of the ex-students of the Ibarapa Poly. He said that the body was ready to take up the struggle and make sure that the matter is resolve on time.

“We want to urge the Oyo State government to do their best to resolve this issue, the management of this institution in conjunction with the NBTE must also make sure that this problem is resolve on time,” he said.

According to reports, the Ibarapa Polytechnic, Eruwa Formerly Known As The Polytechnic Ibadan (Adeseun Ogundoyin Campus), has embarked on an indefinite strike following protest by the students of the institution.

It was learnt that the students who were protesting the addition of a late registration fee by the management took to the streets but were silenced by the management who swung into action immediately to forestall a break down of law and order.

Most of the students were said to have been arrested by security agents. Consequently the management released a notice declaring a mid-semester break and cancellation of the semester examination which was suppose to start on that same day.

See More Under: The Ibarapa Polytechnic