Home » School News » FUOYE Shut Down as Students Protest Against the “No School Fees,...

FUOYE Shut Down as Students Protest Against the “No School Fees, No Examination” Policy

Students of Federal University Oye-Ekiti (FUOYE), on Monday 14th May 2018 embarked on a protest against the institution’s directive preventing students who had not paid their school fees from sitting for the ongoing first semester examination.

The institution’s directive had already posted a notice preventing students who had not paid their school fees from sitting for the ongoing first semester examination. 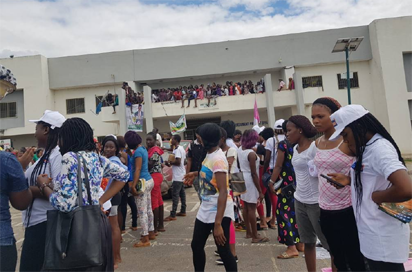 One of the protesters, who pleaded for anonymity, said that some students were denied access to the examination hall on May 10 inspite of the fact that the deadline for the payment of school fees had not lapsed.

NAN also reports that the protest disrupted the examination. But the institution’s Public Relations Officer, Mr Godfrey Badji, told NAN that some students who had not fully paid their school fees were the ones protesting.

The students expressed their grievances as some were denied access to the exam hall even though the school fees deadline had not elapsed.

FUOYE Shut Down Over Students’ Protest

The Federal University of Oye Ekiti in Ekiti (FUOYE) has been shit down following protest by the students of the institution. According to a statement by the Acting Registrar of the institution Oyeyimika Koyejo-Fasakin, this is to forestall a break down of Law and Order.

The Statement noted that prior to the proest by the students, the managemnbt was alkready taking steps to respond to the demands of the students. He mentioned that as a mark of  goodwill, the Vice-Chancellor was billed to hold a meeting with the students’ representatives at 13:00 hours on Tuesday, 15th May 2018.

The management also granted a 3-day lecture free period to allow students organise with their parents and guardians as regards their fees.

But disregarding all of these efforts made by the management,some students still deem it fit to cause choas which have the potential to cause a breakdown of law and order.

“It is against this background that the university has been shut down until normalcy is restored to campus.

“Please be informed that the University Management is not insensitive to the plight of students who are yet to fully pay their fees and only dialogue can resolve a matter such as this.

“Lastly, we apologise to all our law-abiding students who are having to contend with the brunt of this episode. The resumption of normal academic activities will be communicated in due course.” He stated.