The Executive Governor of Delta State has appointed three Vice Chancellors for the newly established universities in the state.

It is hereby announced for the information of the general public especially Deltans that the Governor of Delta State, His Excellency, Senator, Dr. Ifeanyi Okowa has approved the appointment of Vice-Chancellors for the three new Universities established by the State Government as follows: 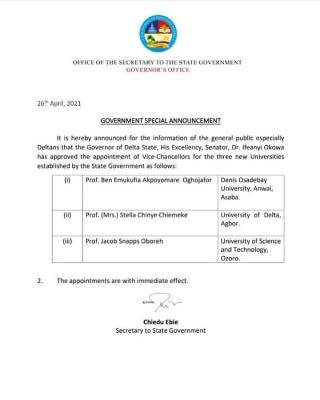 The appointments are with immediate effect.