Nigerian Scholars Last Updated: January 2, 2016 School News
Share Tweet Email Google+ WhatsApp
According to Punch Newspapers, Covenant University’s inventions have been recognized at the research and invention exhibition fairs in Brazil and South Korea, where the institution bagged awards for the invention of latest technologies that promote creative, happy human and smart cities.

The inventions are products of researches from the university’s College of Engineering, including a Solar-Powered Weather Station, which was developed by Dr. Anthony Adoghe; the Green Luminaire by Dr. Hope Orovwode; and the Energy-Retention Bag by Professor Samuel Wara. 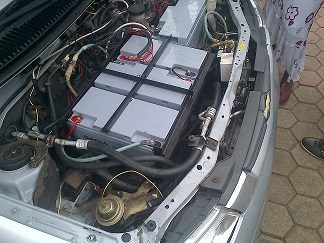 A statement by the institution stated that the team of researchers from the Covenant University Centre for Research, Innovation and Discovery, together with officials from the Nigerian Association of Inventors, made the formal presentation of the awards to the university management recently.

The President of NAI, Shaka Momodu, who attended the invention fairs, stated that the awards were won by Covenant University at the Seoul International Invention Fair, held in November 2015, in Seoul, Korea, and the UniAmerica, Global Exhibition of Inventions For Creative, Happy Human and Smart Cities, held in December 2015 in Foz Do Iguacu, in Parana, Brazil.

He said two of the inventions – the Green Luminaire and the Solar-Powered Weather Station – won the gold and bronze awards respectively at the fairs. The Director of CUCRID, Professor Samuel Wara, stated that the same products had been winning awards in different exhibitions based on different ratings.

“This simply lends credence to the value of the inventions in relation to meeting needs across different geographical locations,” he said.

CU’s Vice-Chancellor, Professor Charles Ayo, congratulated the research team involved in the development of the products, noting that within three months, the Research Cluster headed by Professor Wara, through the leadership of the Nigerian Association of Inventors, had never represented the university anywhere without having proofs to show for the quality of research in the university.

Ayo also stressed the need to move towards product commercialisation in order to get the public to enjoy the university’s inventions.

He said this would be in line with the institution’s short-term goal for the academic year, which is “Innovation, Product Development and Nation Building.”