Corps Members Can Be Mobilized for War – NYSC DG

National Youth Service Corps Members can be mobilized for war. This statement was said by the DG of NYSC. See details below. 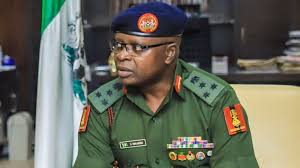 The Director-General of the National Youth Service Corps, Brig. Gen Shuaibu Ibrahim, in a television interview with Channels TV, has said corps members are part of the national defense policy of Nigeria and may be called up to defend the country where there is a serious war.

The DG made the revelation while reacting to calls by some lawmakers to scrap the NYSC scheme which is compulsory for all Nigerian students who graduate before the age of 30.

According to Ibrahim, corps members are like soldiers on reserve for cases of emergency like war. He said their training and knowledge such as blowing the army horn, playing with the military band, and drills make them an asset in defending the country against invaders.

The DG’s statement was trailed with hilarious reactions from the social space.