The President/VC Prof. Ademola S. Tayo of the Babcock University on behalf of the Board of Trustees, Council, and Senate request the pleasure of your company at the 19th Undergraduate and 10th Postgraduate 2nd Virtual CONVOCATION CEREMONY for the award of Degrees and Prizes on Sunday, June 27, 2021, virtually by 9:00 am.

Visit https://t.co/Z4eaWBbiYJ to join us live or stream live on Youtube (https://t.co/t3PTRmneO6) 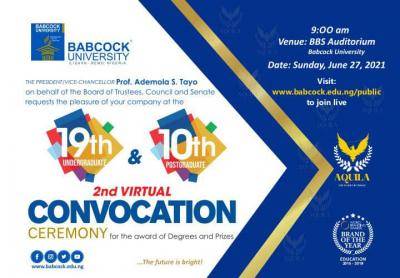 Babcock University is a private Christian co-educational Nigerian university owned and operated by the Seventh-day Adventist Church in Nigeria. The university is located equidistant between Ibadan and Lagos. Enrolment was about 6,000 as of 2009.

It is a part of the Seventh-day Adventist education system, the world’s second largest Christian school system.

Babcock University was named after an American missionary by the name of David C. Babcock, who pioneered the work of the Seventh-day Adventist Church in Nigeria in 1914. He was based in Erunmu in Oyo State, Nigeria.