Students of the Federal Polytechnic, Auchi (AUCHIPOLY) have reportedly given the Federal government a seven-day ultimatum to remove the acting rector of the institution, Sanusi Jimah. 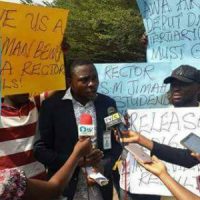 It was learnt that the students issued the Ultimatum at the headquarters of the Federal Ministry of Education in Abuja on Monday.

The students accused Jimah of introducing unfriendly policies that threatens the academic progress and peace in the polytechnic.

Their demands include the release of the outcome of the selection interviews held in July 2016 and the immediate appointment of a substantive rector from any of the three successful candidates in the exercise.