Home » School News » Appalling! How Pupils Are Transported To School In Lokoja

Appalling! How Pupils Are Transported To School In Lokoja

Perhaps you don’t know where Lokoja is sitauted. The city is the capital of Kogi State, Nigeria. Although the area has been inhabited for thousands of years, the present settlement at the city was established in 1857 by the British explorer William Baikie at the site of an earlier model farm constructed during the failed Niger expedition of 1841. Lokoja was the capital of the British Northern Nigeria Protectorate and remained a convenient administrative town for the British colonial government after the amalgamation of Northern and Southern Nigeria in 1914. The first Governor-General, Sir Frederick Lugard, governed the new nation of Nigeria from the city.

The pictures you see below were taken in Lokoja. These pupils at the back of the truck have no other quick means of getting to school. These are school kids between the ages of 4-5 being transported from school in this open tricycle with no safety seats. 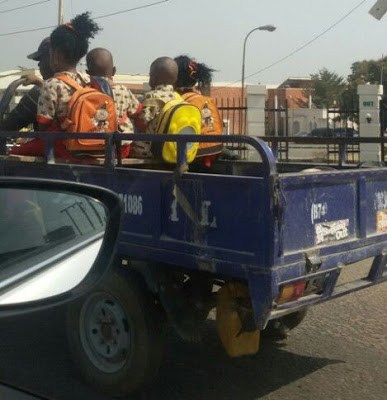 The city’s population has grown to an estimated count of over 90,000 inhabitants. It is a trade center with respect to its agricultural products; this is because it is situated at the confluence of the Niger and Benue rivers, and is close to the new federal capital of Nigeria in Abuja. It is also home to Kogi State Polytechnic and the newly established Federal University Lokoja. Near the city, in Ajaokuta, are metallurgy facilities and iron ore mines.