The Senate of Adamawa State University (ADSU), Mubi, has approved the expulsion of eight (8) Students for their involvement in examination malpractice during the first semester 2020/2021 academic session. 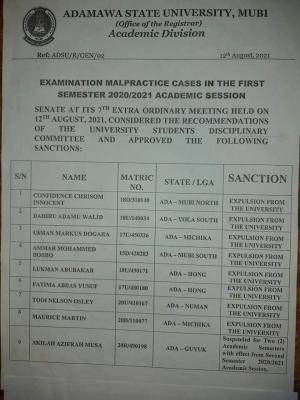 According to a circular released from the Academic Division of the University, the decision was taken at the 7th extraordinary Senate Meeting held on 12th August, 2021 following the consideration of the recommendations of the Students Disciplinary Committee by the Senate of the University.

All students are advised to desist from getting involved in any form of Malpractice as the University Management is poised to enforce the zero tolerance to all forms of misconduct by Students.

Adamawa State University, ADSU has expelled 23 of its students over examination malpractice-related offences. Details are as follows;

The Senate of Adamawa State University, Mubi has approved the expulsion of Twenty three (23) Students from the University for their involvement in examination Malpractice during the just concluded First Semester examinations for the 2020/2021 Academic Session.

In a circular signed by the Academic Secretary of the University, the decision to expel the students was taken at the 99th Senate Meeting held on 28th July, 2021. The circular further stated that the resolution was reached following consideration of the recommendations of the University Students Disciplinary Committee. 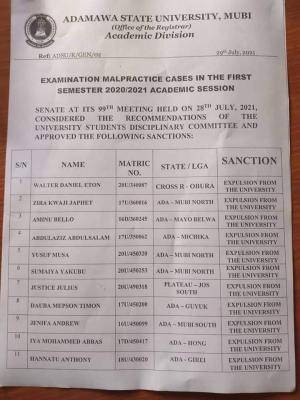 All the students involved were directed to hand over all University properties in their possession and vacate the campus with immediate effect.

The names of affected students have been published on the school’s notice board.