A few weeks ago, the Joint Admission and Matriculation Board (JAMB) met representatives of Universities, Polytechnics and Colleges of Education, to reveal the new criteria for admission into tertiary institutions in Nigeria.

The point system was stated to be the most important part of the new process.

The points are evenly spread out between your O’level and Jamb results to provide a level playing field for all.

In the first case, any candidate who submits only one result which contains his/her relevant subjects already has 10 Points, the exam could be NECO, WAEC, GCE etc, but any candidate who has 2 sittings only gets 2 Points.

So this means that aspirants with only one result are at an advantage but only just. 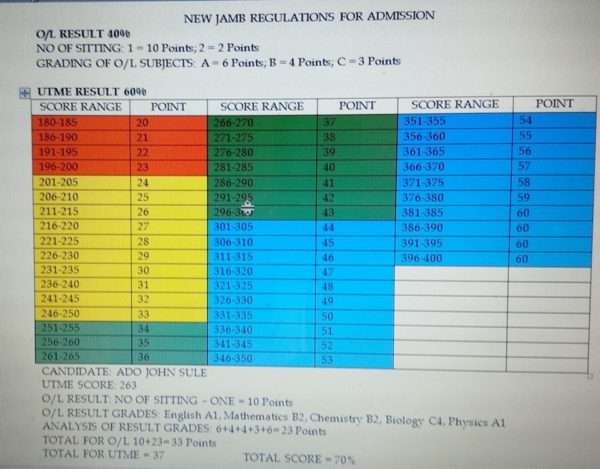 Other Screening Rules to be Adopted

1. Screening of candidates shall be for those offered Provisional Admissions ONLY.

2. No written examination to be conducted.

3. Verification of Course Requirements (O levels or A levels).

i. Online Result Slip
ii. Printout
iii. Provisional Admission Letter
iv. Photo Album
v. Check list
vi. Biometrics
vii. Before a candidate can seat be considered for screening, he/she must have been given provisional admission by JAMB.
viii. Institutions are free to source from other Course(s) to compensate for SHORTFALL in any of the criteria.

More About the JAMB Point System

As earlier stated, this is the most critical part of the new screening process.

The next point grades after the basis of sitting fall into the O’level grades.

The next point is the UTME scores.

We have used this admission points model from JAMB to prepare a simple Admission Points Calculator that consists of 5 questions.

You can proceed to the calculator to find out your chances of getting admission this year by clicking on the link below: