Students of the Adeyemi College of Education, Ondo (ACEONDO) have elected new students’ union executives for the 2020/2021 academic session. 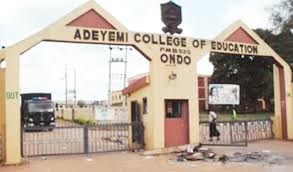 Announcing the election result after the voting period, the Students’ Union Electoral Commission (ELECO) Chairman, Comrade Ayara Elizabeth, disclosed that a total number of 1,745 (One thousand, seven hundred and forty-five) students participated in the election.

For the office of Students’ Union President, Comrade Ayara declared Odunayo Gbenga (OdunSpecial) winner. He polled 983 (56.3%) of the total vote cast to defeat his rival, Oyeleke Oluwatobi Samson (TeeGold), who polled 762 (43.7%) of the votes.

Other results declared were, Vice President, Ismail Zainab O. (O’Zeema) was declared the winner. She polled 1,137 (66.2%) of the total votes cast to defeat her opponent, Ademulegun Christiana (Admiral), who polled 608 (34.8%) of the votes.

General Secretary, Olorundare, Anuoluwatomi (Starr). She polled 947 (54.3%) of the total votes to defeat his rival, Banjo Damilare (4matic) of Mathematics Department, who polled 798 (45.7%) of the votes.

Assistant General Secretary, Akingbohugbe Esther (Olori) was declared the winner, having polled 1,091 (62.5%) of the total vote cast to defeat her opponent, Adegboye Elijah (Slimboo), who polled 654 (37.5%) of the votes.

Babatola Damilare (Darex) was elected Director of Social and Cultual, unopposed, with 1,745 (100%) of the votes.

Ojo-Fadehan Olaleye (Admin) was elected Director of Sports, unopposed with 1,745 (100%) of the votes.

For the office of Director of Information and Publicity, Eniola Oluwadamilare (CaptainGold), was declared the winner, having polled 928 (53.2%) of the total votes to defeat his two opponents; Abdulrasak Muideen (Abdul) got 663 (38%) of the votes and Mustapha Mahafuza got 154 (8.8%) of the votes.

Speaking after announcing the outcome of the election, the Eleco Chairman, Comrade Ayara Elizabeth thanked God for the success of the election inspite of challenges faced before, and during the election.

Speaking further, Comrade Ayara commended the executives and members of the ELECO for their support and cooperation which gave birth to the successful conduct of the election. She added that they worked as a team.

She equally appreciated the supports from College Management through the Dean of Students Affairs, Mr. O. O. Akinola, as well as the outgoing Students Union Executives.

In his reaction after the announcement of the election result, the Provost of the College, Dr. Samuel Akintunde, who was represented by his Deputy, Dr. Gbade Ikuejube, thanked God for the peaceful election and equally commended the efforts of Dean Students Affairs, Director of MIS, the Students Union Electoral Commission, Security operatives and all those who contributed to the successful conduct of this years Students Union election.