The list of courses offered by Adeyemi College Of Education, Ondo (ACEONDO) are displayed on this page. Candidates who wish to apply through JAMB should click on any of the courses to see the course requirements. 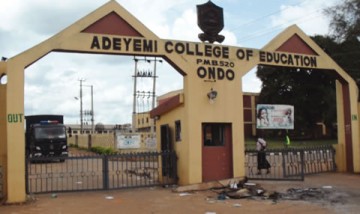 Here is a list of courses offered by Adeyemi College Of Education, Ondo (ACEONDO) and all candidates interested in studying at the institution are encouraged to take note:

Adeyemi College Of Education, Ondo to be Upgraded to University Soon – Provost

THE Provost of Adeyemi College of Education (ACE), Ondo, Prof Olukoya Ogen, on Monday said the college would soon be converted to a university, saying the Federal Government has no plan to dump the idea of upgrading the institution to a university.

Ogen who disclosed this in Ondo, during a press conference to herald the 34th convocation ceremonyof the institution, however, said plans had reached advanced stage to complete the upgrade of the College to university.

He said the upgrade was temporarily put on hold because there was no enabling law to support the upgrade to university status.

The Provost assured that the process would be completed in due course after the passage into law by the House of Representatives and the final ascent by President Buhari, disclosing that the Senate had passed the law to upgrade the institution.

Speaking on the convocation, Ogen said about 12,628 graduands would be churned out with different certificates in education during the 34th convocation ceremony of the institution.

He said the institution has to choose between holding an annual ceremony at the expense of tangible development projects in the school.

Ogen said out of the 12,628 graduating students, 6, 298 students would graduates with National Council of Education (NCE), 5, 688 with the first degree in education, 51 with the diploma, 53 in Postgraduate diploma of education and the rest 538 in the sandwich and part-time programmes.

Speaking on the activities lined up for the ceremony, he said a convocation lecture will come up on Tuesday, October 9, 2018, and will be delivered by Prof. Toyin Falola from University of Texas with the title ” Educational Wealth.”

He said Conferment of Degrees, Fellowship and award of certificates and prizes will come up on Wednesday, 10th October while a special day would be dedicated to the celebration of teachers.

He disclosed that four eminent personalities including the Secretary of Pan Yoruba Socio-political group, Afenifere, Bashorun Seinde Arogbofa, Prof. Falola, among others would be conferred with fellowship and awards of the institution.