Serena Omo-Lamai (17 years old) has been granted admission to study in 13 universities in America and Canada. 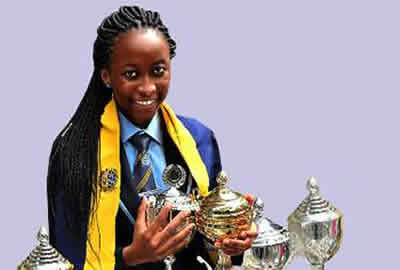 Some of the universities  where she was offered admission include Emory University, Georgia Institute of Technology, New York University, among others.

Speaking in a telephone interview with our correspondent on Monday, Omo-Lamai said she settled for Syracuse University because of the institution’s world-class research laboratory and a $51,000 scholarship offer.

The teenager, who aspires to be a medical engineer, disclosed that she would study medicine as a second degree.

“I feel very honoured and I feel it is an opportunity to work harder. I know that I have to justify the offer. I chose Syracuse University because it has a very good research lab and the offer came with $51,000 scholarship. I have always loved Biology, Chemistry, Physics and Geography.

“My parents are my role models, but I am also inspired by anyone who is hard working, anyone who puts so much efforts into what they do,” she said.

A statement from the Vice-Principal, Dowen College, Mr. Muraina Olusesi, on Monday, said Omo-Lamai was the valedictorian of the school last year.

He said, “Alumni students of the school have continued to show the stuff they are made of in the world of academic excellence. Serena Omo-Lamai was our best graduating pupil in the 2014/2015 academic session and she has done it again.

“She secured admission to 13 universities across the globe, but she has settled for Syracuse University where she signed up to read Bio-Medical Engineering, with an annual scholarship of $56,000.

“Also, Daniel Obaseyi Buraimo, Class of 2010, graduated with First Class honours degree in Computer Science from the University of San Francisco, California, USA. According to the university, he is the first Nigerian to attain this height.”