17 UNILAG Girls Have Gone Missing While Going To Fake Party

According to media reports, 17 girls out of 20, from the University of Lagos (UNILAG), Akoka, have gone missing and suspected to be held by ritualists after being invited to a fake party in Lekki.

Three managed to escape the clutches of the their captives and are said to be looking crazed with fear and panic after losing contact with their friends.

This is according to a Twitter user with ID “@Aphrodeity_”, who narrated that the girls found themselves in a white house in the middle of no where, instead of the party they were to attend. 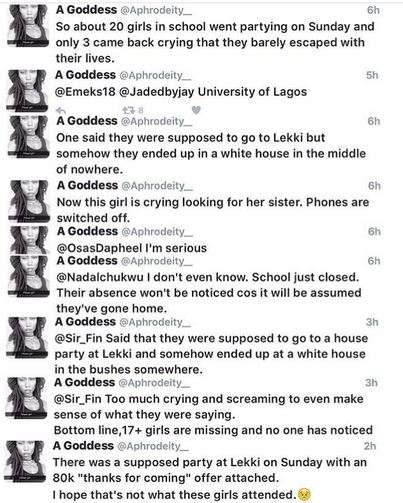 She wrote “So about 20 girls in school went partying on Sunday and only 3 came back crying that they barely escaped with their lives.”

“One said they were supposed to go to Lekki but somehow they ended up in a white house in the middle of nowhere”.