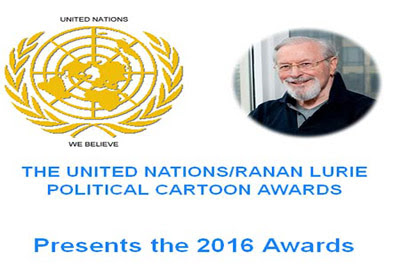 The UNITED NATIONS in its desire to promote the highest standard of excellence in political cartoons depicting the spirit of the United Nations has established this annual political cartoon award given in the international field, and named the award after political cartoonist Ranan Lurie.

The names of the winners of our thirteen prizes will be published on December 15, 2016, on this web site, together with their winning cartoons:

Entries must be submitted in writing and addressed to:

(No phone or fax calls or Emails, please). While cartoonists may send in what ever they please, the contest does not encourage maligning member nations.

Winning cartoons will be chosen for their high professional standards in art, political analysis of events, projection of events to come, humor, while also reflecting the spirit and principles of the U.N.