Home » Past Questions » Writing and Language » DIRECTIONS Each passage below is accompanied by a number of questions. For som...

DIRECTIONS Each passage below is accompanied by a number of questions. For som...

DIRECTIONS
Each passage below is accompanied by a number of questions. For some questions, you will consider how the passage might be revised to improve the expression of ideas. For other questions, you will consider how the passage might be edited to correct errors in sentence structure, usage, or punctuation. A passage or a question may be accompanied by one or more graphics (such as a table or graph) that you will consider as you make revising and editing decisions.
Some questions will direct you to an underlined portion of a passage. Other questions will direct you to a location in a passage or ask you to think about the passage as a whole. After reading each passage, choose the answer to each question that most effectively improves the quality of writing in the passage or that makes the passage conform to the conventions of standard written English. Many questions include a “NO CHANGE” option. Choose that option if you think the best choice is to leave the relevant portion of the passage as it is.

A total of 11 questions are based on the following passage.

Most of Greenland’s interior is covered by a thick layer of ice and compressed snow known as the Greenland Ice Sheet. The size of the ice sheet fluctuates seasonally: in summer, average daily high temperatures in Greenland can rise to slightly above 50 degrees Fahrenheit, partially melting the ice; in the winter, the sheet thickens as additional snow falls, and average daily low temperatures can drop to [Q1] as low as 20 degrees. 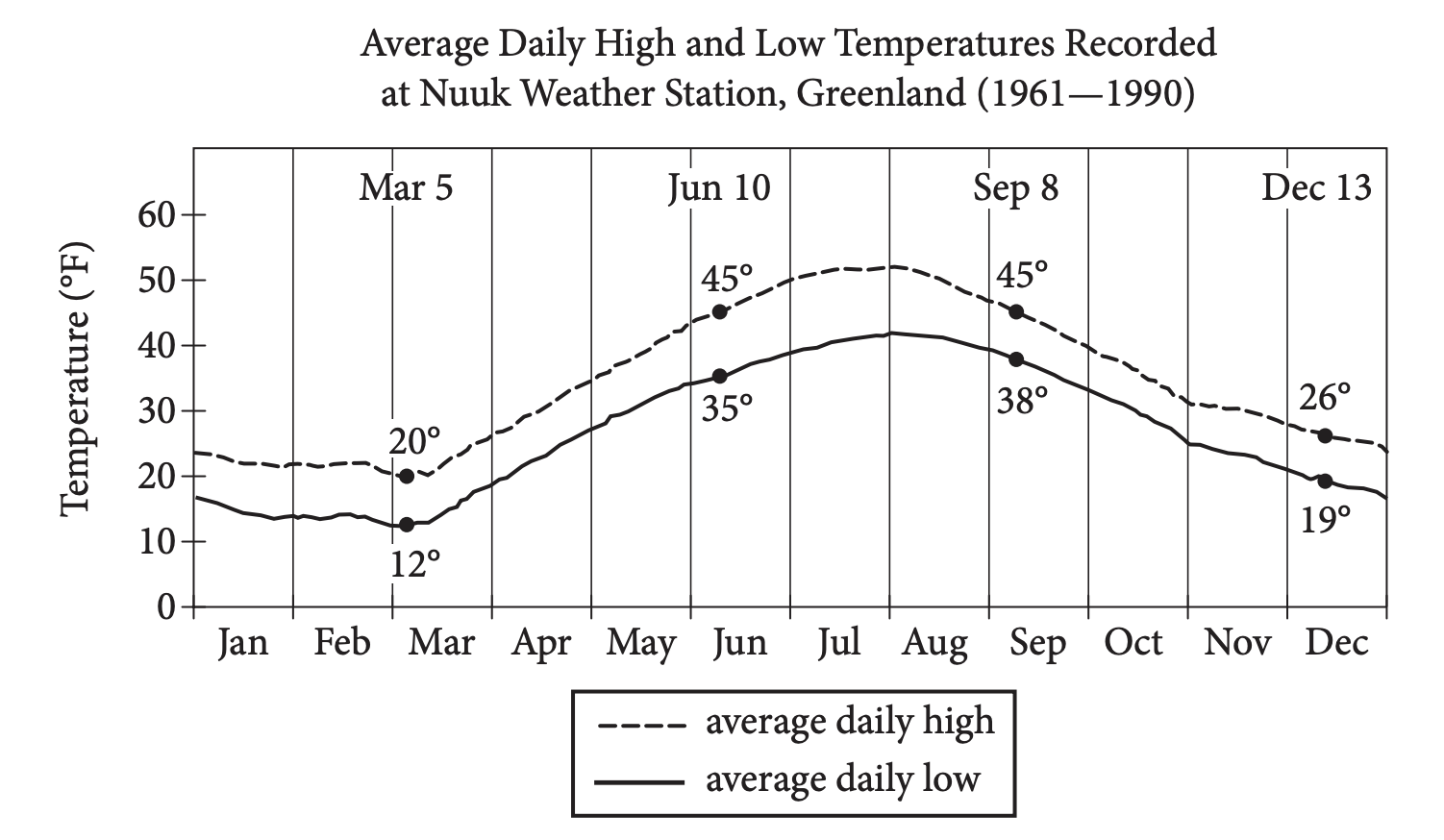 Typically, the ice sheet begins to show evidence of thawing in late [Q2] summer. This follows several weeks of higher temperatures.  [Q3] For example, in the summer of 2012, virtually the entire Greenland Ice Sheet underwent thawing at or near its surface by mid-July, the earliest date on record. Most scientists looking for the causes of the Great Melt of 2012 have focused exclusively on rising temperatures. The summer of 2012 was the warmest in 170 years, records show. But Jason [Q4] Box, an associate professor of geology at Ohio State believes that another factor added to the early [Q5] thaw; the “dark snow” problem.
According to Box, a leading Greenland expert, tundra fires in 2012 from as far away as North America produced great amounts of soot, some [Q6] of it drifted over Greenland in giant plumes of smoke and then [Q7] fell as particles onto the ice sheet. Scientists have long known that soot particles facilitate melting by darkening snow and ice, limiting  [Q8] it’s ability to reflect the Sun’s rays. As Box explains, “Soot is an extremely powerful light absorber. It settles over the ice and captures the Sun’s heat.” The result is a self-reinforcing cycle. As the ice melts, the land and water under the ice become exposed, and since land and water are darker than snow, the surface absorbs even more heat, which [Q9] is related to the rising temperatures.
[1] Box’s research is important because the fires of 2012 may not be a one-time phenomenon. [2] According to scientists, rising Arctic temperatures are making northern latitudes greener and thus more fire prone. [3] The pattern Box observed in 2012 may repeat [Q10] itself again, with harmful effects on the Arctic ecosystem. [4] Box is currently organizing an expedition to gather this crucial information. [5] The next step for Box and his team is to travel to Greenland to perform direct sampling of the ice in order to determine just how much the soot is contributing to the melting of the ice sheet. [6] Members of the public will be able to track his team’s progress—and even help fund the expedition—through a website Box has created. [Q11]

Q9: Which choice best completes the description of a self-reinforcing cycle?

A)
NO CHANGE
B)
raises the surface temperature.
C)
begins to cool at a certain point.
D)
leads to additional melting.

Choice D is the best answer. The preceding sentences in the paragraph have established that a darker surface of soot-covered snow leads to more melting because this darker surface absorbs heat, whereas a whiter surface, free of soot, would deflect heat. As the passage points out, exposed land and water are also dark and cannot deflect heat the way ice and snow can. Only choice D reflects the self-reinforcing cycle that the preceding sentences already imply.
Choices A, B, and C are incorrect because the information each provides fails to support the previous claim that the “result” of the soot “is a self-reinforcing cycle.”