This passage is adapted from John Bohannon, “Why You Shouldn’t Trust Internet Comments.” ©2013 by American Association for the Advancement of Science.

The “wisdom of crowds” has become a mantra of
the Internet age. Need to choose a new vacuum
cleaner? Check out the reviews on online merchant
Amazon. But a new study suggests that such online
5 scores don’t always reveal the best choice. A massive
controlled experiment of Web users finds that such
ratings are highly susceptible to irrational “herd
behavior”—and that the herd can be manipulated.
Sometimes the crowd really is wiser than you. The
10 classic examples are guessing the weight of a bull or
the number of gumballs in a jar. Your guess is
probably going to be far from the mark, whereas the
average of many people’s choices is remarkably close
to the true number.
15 But what happens when the goal is to judge
something less tangible, such as the quality or worth
of a product? According to one theory, the wisdom
of the crowd still holds—measuring the aggregate of
people’s opinions produces a stable, reliable
20 value. Skeptics, however, argue that people’s
opinions are easily swayed by those of others. So
nudging a crowd early on by presenting contrary
opinions—for example, exposing them to some very
good or very bad attitudes—will steer the crowd in a
25 different direction. To test which hypothesis is true,
you would need to manipulate huge numbers of
people, exposing them to false information and
determining how it affects their opinions.
A team led by Sinan Aral, a network scientist at
30 the Massachusetts Institute of Technology in
Cambridge, did exactly that. Aral has been secretly
working with a popular website that aggregates news
stories. The website allows users to make comments
about news stories and vote each other’s comments
35 up or down. The vote tallies are visible as a number
next to each comment, and the position of the
comments is chronological. (Stories on the site get an
average of about ten comments and about three votes
per comment.) It’s a follow-up to his experiment
40 using people’s ratings of movies to measure how
much individual people influence each other online
(answer: a lot). This time, he wanted to know how
much the crowd influences the individual, and
whether it can be controlled from outside.
45 For five months, every comment submitted by a
user randomly received an “up” vote (positive); a
“down” vote (negative); or as a control, no vote at all.
The team then observed how users rated those
comments. The users generated more than
50 100,000 comments that were viewed more than
10 million times and rated more than 300,000 times
by other users.
At least when it comes to comments on news
sites, the crowd is more herdlike than wise.
55 Comments that received fake positive votes from the
researchers were 32% more likely to receive more
positive votes compared with a control, the team
reports. And those comments were no more likely
than the control to be down-voted by the next viewer
60 to see them. By the end of the study, positively
manipulated comments got an overall boost of about
25%. However, the same did not hold true for
negative manipulation. The ratings of comments that
got a fake down vote were usually negated by an up
65 vote by the next user to see them.
“Our experiment does not reveal the psychology
behind people’s decisions,” Aral says, “but an
intuitive explanation is that people are more
skeptical of negative social influence. They’re more
70 willing to go along with positive opinions from other
people.”
Duncan Watts, a network scientist at Microsoft
Research in New York City, agrees with that
conclusion. “[But] one question is whether the
75 positive [herding] bias is specific to this site” or true
in general, Watts says. He points out that the
category of the news items in the experiment had a
strong effect on how much people could be
manipulated. “I would have thought that ‘business’ is
80 pretty similar to ‘economics,’ yet they find a much
stronger effect (almost 50% stronger) for the former
than the latter. What explains this difference? If we’re
going to apply these findings in the real world, we’ll
need to know the answers.”
85 Will companies be able to boost their products by
manipulating online ratings on a massive scale?
“That is easier said than done,” Watts says. If people
detect—or learn—that comments on a website are
being manipulated, the herd may spook and leave
90 entirely. 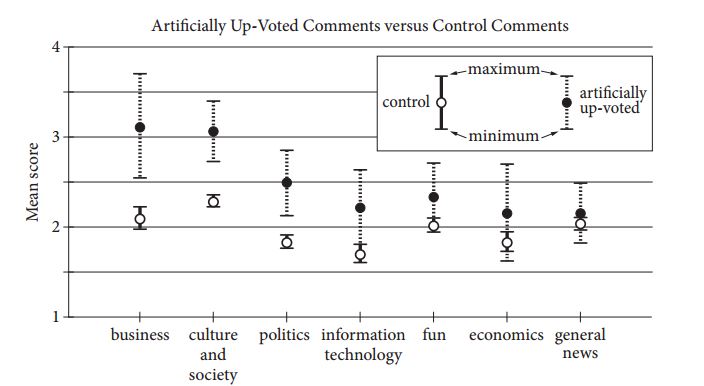 Choice A is the best answer. In the passage, the author explains that those who are skeptical of the theory that “measuring the aggregate of people’s opinions produces a stable, reliable value” (lines 18- 20) believe that “people’s opinions are easily swayed by those of others” (lines 20-21). This idea is best supported in lines 55-58, which describe a finding from a study of opinions in crowds: “Comments that received fake positive votes from the researchers were 32% more likely to receive more positive votes compared with a control, the team reports.” In other words, people were more likely to give a positive vote when they thought other people had given positive votes.

Choices B, C, and D are incorrect because the lines cited do not provide support for the skeptics’ idea that people’s opinions are easily influenced by the thoughts of others. Instead, they cite findings concerning people giving ratings different from those already given (choices B and C) and share an observation that the degree to which others can be influenced depends in part on the context of the situation (choice D).