Home » Past Questions » Reading » A total of 10 questions are based on the following passage.This passage is adapt...

A total of 10 questions are based on the following passage.This passage is adapt...

A total of 10 questions are based on the following passage.

This passage is adapted from J. D. Watson and F. H. C. Crick,
“Genetical Implications of the Structure of Deoxyribonucleic
Acid.” ©1953 by Nature Publishing Group. Watson and Crick
deduced the structure of DNA using evidence from Rosalind
Franklin and R. G. Gosling’s X-ray crystallography diagrams
of DNA and from Erwin Chargaff’s data on the base
composition of DNA.

The chemical formula of deoxyribonucleic acid
(DNA) is now well established. The molecule is a
very long chain, the backbone of which consists of a
regular alternation of sugar and phosphate groups.
5 To each sugar is attached a nitrogenous base, which
can be of four different types. Two of the possible
bases—adenine and guanine—are purines, and the
other two—thymine and cytosine—are pyrimidines.
So far as is known, the sequence of bases along the
10 chain is irregular. The monomer unit, consisting of
phosphate, sugar and base, is known as a nucleotide.
The first feature of our structure which is of
biological interest is that it consists not of one chain,
but of two. These two chains are both coiled around
15 a common fiber axis. It has often been assumed that
since there was only one chain in the chemical
formula there would only be one in the structural
unit. However, the density, taken with the X-ray
evidence, suggests very strongly that there are two.
20 The other biologically important feature is the
manner in which the two chains are held together.
This is done by hydrogen bonds between the bases.
The bases are joined together in pairs, a single base
from one chain being hydrogen-bonded to a single
25 base from the other. The important point is that only
certain pairs of bases will fit into the structure.
One member of a pair must be a purine and the other
a pyrimidine in order to bridge between the two
chains. If a pair consisted of two purines, for
30 example, there would not be room for it.
We believe that the bases will be present almost
entirely in their most probable forms. If this is true,
the conditions for forming hydrogen bonds are more
restrictive, and the only pairs of bases possible are:
35 adenine with thymine, and guanine with cytosine.
Adenine, for example, can occur on either chain; but
when it does, its partner on the other chain must
always be thymine.
The phosphate-sugar backbone of our model is
40 completely regular, but any sequence of the pairs of
bases can fit into the structure. It follows that in a
long molecule many different permutations are
possible, and it therefore seems likely that the precise
sequence of bases is the code which carries the
45 genetical information. If the actual order of the bases
on one of the pair of chains were given, one could
write down the exact order of the bases on the other
one, because of the specific pairing. Thus one chain
is, as it were, the complement of the other, and it is
50 this feature which suggests how the deoxyribonucleic
acid molecule might duplicate itself.

The table shows, for various organisms, the percentage of
each of the four types of nitrogenous bases in that
organism’s DNA. 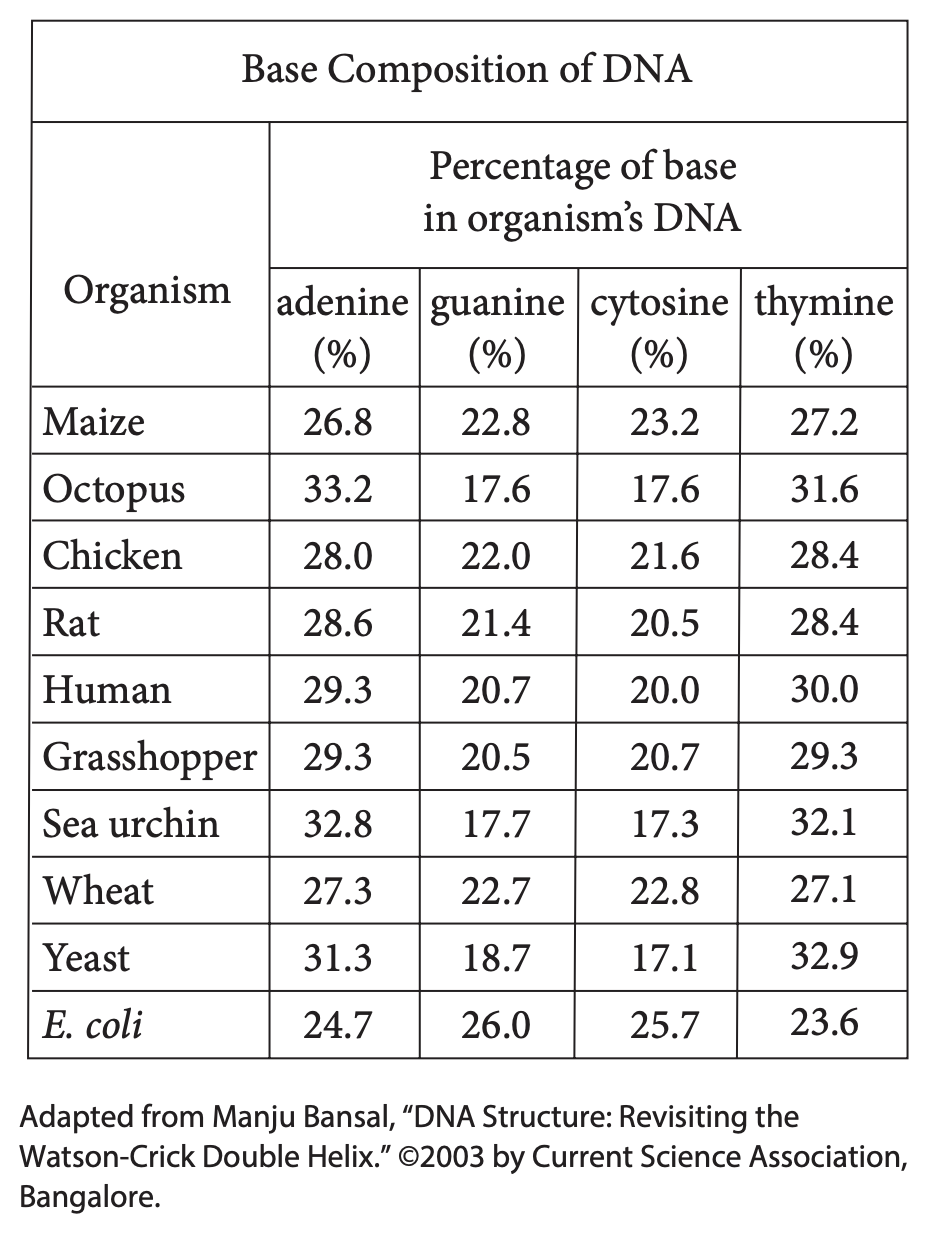 (8 of 10) Do the data in the table support the authors’ proposed pairing of bases in DNA?

Choice A is the best answer. The authors state: “We believe that the bases will be present almost entirely in their most probable forms. If this is true, the conditions for forming hydrogen bonds are more restrictive, and the only pairs of bases possible are: adenine with thymine, and guanine with cytosine" (lines 31-35). The table shows that the pairs adenine/thymine and guanine/cytosine have notably similar percentages in DNA for all organisms listed.
Choice B is incorrect. Although the choice of “Yes” is correct, the explanation for that choice misrepresents the data in the table. Choices C and D are incorrect because the table does support the authors’ proposed pairing of nitrogenous bases in DNA molecules.