Home » Articles » What Do “Future Ready” Students Look Like?

Preparing today’s students to be college and career ready can seem like a daunting challenge. Experts have identified a long list of indicators — from content mastery to lifelong learning skills — that are considered critical for students’ future success.

But that’s not the whole story. It turns out that passion, a sense of humor, and knowing how to recover from setbacks are also critical readiness factors when it comes to tackling real-world problems.

Those were among the insights shared by winners of the $1 million Hult Prize, which leverages student innovation to address global issues. The competition challenges post-secondary students from around the world to improve the lives of billions of people by launching sustainable social businesses. For today’s K-12 students — and their teachers — the competition offers a preview of the challenges and opportunities ahead. 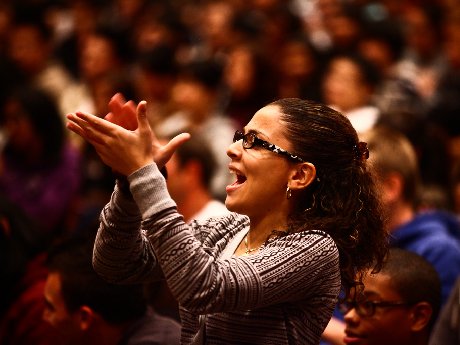 1. Knowing How to Learn

This year’s winning team, composed of four MBA students from National Chengchi University in Taiwan, have developed a plan to improve early childhood education in the urban slums of Latin America and Asia. They call themselves Team IMPCT.

“To be honest, none of us knew anything about early childhood education before this competition,” admits IMPCT member Juan Diego Prudot, whose expertise is software development.

To kick off each annual Hult competition, former President Bill Clinton issues a specific call to action at the Clinton Global Initiative. The 2015 challenge, improving early childhood education in urban slums, could improve the lives of some 10 million children growing up in extreme poverty.

Team IMPCT got up to speed on the topic in a hurry, interviewing experts and parents, studying the literature, and observing early childhood education programs in diverse settings. “As we learned more about the impact early childhood education can have, we fell in love with the idea,” says Prudot. From the start, Team IMPCT also demonstrated a key readiness factor: knowing how to learn.

Team IMPCT members come from four countries — Honduras, El Salvador, Taiwan, and Canada — with expertise ranging from philosophy to finance. “We all think in different ways,” says Prudot, “but that turned out to be useful. We complemented each other.”

To work effectively as a team, they first had to navigate cultural differences. Taylor Scobbie, from Calgary, Canada, said he tended to be the “brash, outspoken” member of the group, and sometimes risked offending his Latino team members by speaking his mind. “We had to learn to overcome these problems,” says Scobbie, “and realize where we were all coming from.” His undergraduate studies in philosophy proved useful. “Philosophy gives you tools to think your way around big problems.”

For teachers who want to develop students’ collaborative skills from a young age, Scobbie offers this advice: “Put students together in situations they’re not comfortable with, so that they have to deal with conflicts in a useful way.” His team found its way to productive collaboration “because we all believed in our cause. We were happy to work out our differences because the issue was bigger than us. If you believe in what you’re doing,” he adds, “working out your problems is the only option.”

By all accounts, team IMPCT was a long shot for the top spot. The winnowing process was intense, with hundreds of teams competing for six finalist slots. At a regional competition in Dubai, Team IMPCT had a strong performance but finished as a runner-up.

“Losing at regionals was a crucial point in the whole experience,” says Prudot. Instead of giving up, the team was encouraged by audience feedback to keep going. “We knew we were onto something.” They continued to refine their plan and eventually earned a spot in the finals by winning a “sudden death” online round. They also created a crowdfunding campaign that raised $58,000 in 30 days, enabling them to pilot their model in El Salvador and improve it with user feedback.

Resilience turns out to be another key readiness factor for tackling hard problems. “There’s no better trait for entrepreneurs,” says Scobbie. “You need to get past failures quickly. Entrepreneurs fail fast and learn from mistakes.” A sense of humor helped the team over rough spots. “You need to be with a team where the laughs outnumber the angry outbursts.”

The Team IMPCT model will bring Montessori-style preschool education to some of the poorest slums in Latin America. Early childhood centers calledPlayCares will operate as franchises, owned by local entrepreneurs. Most are expected to be run by mothers who previously provided informal day care at home. They will receive training in Montessori methods and the opportunity to increase their earnings while improving the quality of early education in their community. Each center will serve about 15 to 20 families.

Finding a solution well-suited to local context was important during the design process. Community empowerment emerged as an early goal. “We want to be a solution with the community, for the community,” says Prudot.

“We wanted an early childhood intervention that would keep kids out of gangs,” adds Scobbie, and not just emphasize rote learning. “The Montessori approach develops self-esteem, self-control, respect for others. We thought that would be ideal for developing people who know how to think their way around problems.”

To make the concept financially sustainable, Team IMPCT is developing an online platform that will enable socially minded investors to buy in and earn a small return, which can be reinvested in more PlayCares. By this time next year, Prudot expects to have 100 centers operating across Latin America, including his home country of Honduras. Interest in Taiwan is also high, with businesses offering to invest in PlayCares for their employees.

Explaining the intricacies of their model requires effective communication skills — another future-readiness factor. Team IMPCT knows how to leverage social media and also make the most of face-to-face pitches so that others are as excited about their world-changing idea as they are.