Elon Musk’s Ideas About What School Students Need to Emulate

Elon Musk is known as one of the greatest risk takers in the world of entrepreneurship and technology and has become a technological icon of our era. He is highly credited for spear heading fast-growing companies like Space-X, Tesla Motors and Solar City and represents the pinnacle of both big thinking and the successful execution of game-changing ideas.

Just like so many other creative entrepreneurs, he has challenging ideas about what our educational systems should be like. Elon Musk recently created a grade school for his kids where he decided to disrupt traditional education, in his own backyard. That’s where he seems to be applying some of the important principles he believes schools should focus on. Let’s explore some of his ideas. 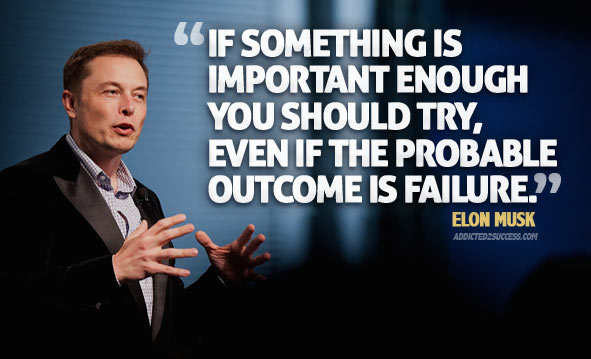 “It’s important to teach problem solving, or teach to the problem and not the tools.” ~Elon Musk

As Socrates discovered long ago, true discovery happens when we present ourselves with intelligent questions, rather than adhere to pre-determined answers- and this couldn’t be more true for students.

As Elon recognized, teaching students by giving them answers to problems that they haven’t yet had a chance to explore (or even understand) destroys creativity, narrows the mind, and leads to boredom.

This is why he’s designed a “problem focus” into his Ad Astra school’s principles which Tom Miller calls the Goldilocks Principle:

But give yourself a tough problem- one that you can see yourself ultimately solving- and you’ll unlock endless motivation to find the answer.

He also believes that schools should be student-paced

But that DOESN’T mean that their potential for learning is any different – and in order to make the most of that potential, a student’s education should ideally be individualized and paced in a way that takes advantage of their current interests and ability level.

Without a huge bankroll, though, this can seem difficult to execute within the context of traditional grade school and college education…

But with the advent of YouTube, MOOCs, and other flexible learning arrangements, try to think of some ways you could customize your learning experience to fit your interests.

Super interested in Quantum Physics? Take a dive down that rabbit hole.

Not so thrilled with 19th century British history? Nothing wrong with just doing the bare minimum and moving on…

Elon also believes that the school environments should be so interesting and extra-curricular that students want to come back everyday.

How Elon educates his kids with these ideas

Musk describes a school without the traditional grade structure of American primary education, with the goal of catering to students’ aptitudes not by arbitrary schedules but in real time, and using problem-solving methods to teach critical thinking.

If you want to teach children how engines work, he says, you wouldn’t want to first teach them all about wrenches and all about screwdrivers. You would show them the engine, and ask how they would take it apart. “Then a very important thing happens, which is that the relevance of the tools becomes apparent,” he says in the interview.

Musk, a father of five, says he started the school for his own children; they have since been joined by a handful of other pupils. (Enrollment stands at 14 now and will increase to 20 in September.) The other students reportedly are the children of employees at SpaceX, Musk’s rocketry firm, but neither Musk nor the company will confirm this.

Musk says he decided to start his own school for his kids because other schools “weren’t doing the things that I thought should be done.” Presumably these things don’t include much of what Musk himself encountered as a student. “I mean, I hated going to school when I was a kid. It was torture,” he told his interviewer on Chinese TV.

Lessons to learn as a student:

And it turns out, the more you can (1) focus on interesting problems to solve, and (2) cater the process to your interests, the more exiting you’ll find learning, and the more productive you’ll be.

An important key to truly educating yourself is to look for problems that interest you to solve, be creative in your brainstorming and learn how to use the tools you need to ultimately solve the problem.

And remember, in thinking creatively, outside the box and against conventional beliefs, you will always find so many ways to solve that one problem, JUST ACT ON ONE SOLUTION, IF IT FAILS, TRY THE NEXT ONE!